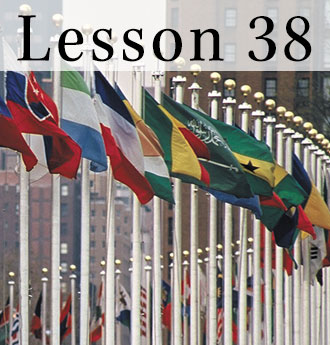 The case summaries below were provided by Oyez and licensed under the Creative Commons Attribution-NonCommercial 4.0 International License. Please visit Oyez.org for more case summaries.

Facts of the case:
This case involved the Treaty of Paris, which established peace in 1783. A Virginian owed a debt to a British subject. A Virginia law provided for the confiscation of such debts on the ground the the debt was owed to an alien enemy. The British subject (actually, his administrator) sued in a federal court to recover on the bond. The administrator argued that the Treaty of Paris ensured the collection of such debts.

Case Question:
Does the Treaty of Paris override an otherwise valid state law?

Case Conclusion:
Four of the five justices wrote opinions. It was the practice of that time for the Court to issue opinions one after another, and there was no "opinion for the Court." Collectively, the justices held that federal courts had the power to determine the constitutionality of state laws. They invalidated the Virginia law under the supremacy clause and, in the words of a distinguished scholar of the period, "established for all time [the Supreme Court's] power of judicial review of state laws."

Facts of the case:
In December 1916, the United States and Great Britain entered into a treaty to protect a number of migratory birds in the U.S. and Canada. Congress passed the Migratory Bird Treaty Act in 1918 in order to facilitate enforcement of the treaty. When Ray P. Holland, the U.S. Game Warden, threatened to arrest citizens of Missouri for violating the act, the state of Missouri challenged the treaty.

Case Question:
Did the treaty infringe upon rights reserved to the states by the Tenth Amendment?

Case Conclusion:
No. In a 7-to-2 decision, the Court held that the national interest in protecting the wildlife could be protected only by national action. The Court noted that the birds the government sought to protect had no permanent habitats within individual states and argued that "but for the treaty and the statute there soon might be no birds for any powers to deal with." The Court thus upheld the exercise of the treaty power and thus found no violation of the Tenth Amendment.

Facts of the case:
In 1996, the Massachusetts Burma Law, which restricted state entities from buying goods or services from companies doing business with Burma, was passed. Afterwards, Congress also imposed mandatory and conditional sanctions on Burma. Businesses with ties to Burma landed on Massachusetts' "restricted trade" list. The list came to include 34 members of the National Foreign Trade Council (Council), a non-profit advocate for American companies that do business abroad. The Council filed suit against Stephen Crosby, the Massachusetts Secretary of Administration and Finance, and other state officials in federal court, claiming that the state act unconstitutionally infringes on the federal foreign affairs power, violates the Foreign Commerce Clause, and is preempted by the Federal Burma Law. The district court permanently barred enforcement of the state act, and the appellate court affirmed. The court also found that the Massachusetts Burma Law violated the Supremacy Clause because the state was acting in an area of unique federal concern, foreign policy, through a balanced, tailored approach.

Case Question:
Is the Massachusetts Burma Law, which restricts the authority of its agencies to purchase goods or services from companies doing business with Burma, unconstitutional under the Supremacy Clause?

Case Conclusion:
Yes. In a opinion delivered by Justice David H. Souter, the Court held that "the state Act is preempted, and its application unconstitutional, under the Supremacy Clause." Justice Souter wrote for the Court that Massachusetts's law created an obstacle to the President's discretion to control economic sanctions against Burma, interfered with Congress's intention to limit economic pressure against the Burmese Government, and was at odds with the President's authority to speak for the United States among the world's nations to develop a comprehensive, multilateral Burma strategy. Therefore, the Massachusetts Burma Law "is invalid under the Supremacy Clause...owing to its threat of frustrating federal statutory objectives."

Facts of the case:
Christopher Simmons was sentenced to death in 1993, when he was only 17. A series of appeals to state and federal courts lasted until 2002, but each appeal was rejected. Then, in 2002, the Missouri Supreme Court suspended Simmon's execution while the U.S. Supreme Court decided Atkins v. Virginia, a case that dealt with the execution of the mentally ill. After the U.S. Supreme Court ruled that executing the mentally ill violated the Eighth and Fourteenth Amendment prohibitions on cruel and unusual punishment because a majority of Americans found it cruel and unusual, the Missouri Supreme Court decided to reconsider Simmons' case. Using the reasoning from the Atkins case, the Missouri court decided, 6-to-3, that the U.S. Supreme Court's 1989 decision in Stanford v. Kentucky, which held that executing minors was not unconstitutional, was no longer valid. The opinion in Stanford v. Kentucky had relied on a finding that a majority of Americans did not consider the execution of minors to be cruel and unusual. The Missouri court, citing numerous laws passed since 1989 that limited the scope of the death penalty, held that national opinion had changed. Finding that a majority of Americans were now opposed to the execution of minors, the court held that such executions were now unconstitutional. On appeal to the U.S. Supreme Court, the government argued that allowing a state court to overturn a Supreme Court decision by looking at "evolving standards" would be dangerous, because state courts could just as easily decide that executions prohibited by the Supreme Court (such as the execution of the mentally ill in Atkins v. Virginia) were now permissible due to a change in the beliefs of the American people.

Case Question:
Does the execution of minors violate the prohibition of "cruel and unusual punishment" found in the Eighth Amendment and applied to the states through the incorporation doctrine of the Fourteenth Amendment?

Case Conclusion:
Yes. In a 5-4 opinion delivered by Justice Anthony Kennedy, the Court ruled that standards of decency have evolved so that executing minors is "cruel and unusual punishment" prohibited by the Eighth Amendment. The majority cited a consensus against the juvenile death penalty among state legislatures, and its own determination that the death penalty is a disproportionate punishment for minors. Finally the Court pointed to "overwhelming" international opinion against the juvenile death penalty. Chief Justice William Rehnquist and Justices Antonin Scalia, Sandra Day O'Connor, and Clarence Thomas all dissented.