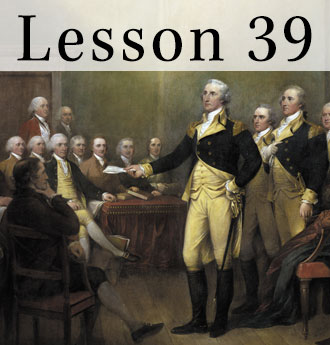 Lesson 39: What Does Returning to Fundamental Principles Mean?

One of the Founders, George Mason from Virginia, said,"No free government, or the blessings of liberty can be preserved to any people, but by frequent recurrence to fundamental principles." In this concluding lesson, you have the opportunity of relating some fundamental principles and ideas of our government to contemporary issues.

The format of this concluding lesson differs from the others. Critical Thinking Exercises similar to others throughout this text present a series of quotations that represent great ideas and principles that have shaped our constitutional heritage. Some of these ideas contradict each other. However, American constitutional history has witnessed many conflicts between competing principles of equal merit. Examples include the conflict between majority rule and minority rights, between sovereign power and fundamental rights, between liberty and order, and between unity and diversity.

Examples of conflicts appear in the following exercises. In each case you will be asked to apply the principles and ideas suggested in the quotations to a contemporary issue, to work through the issue on your own or in small groups, and to reach your own conclusions.

In so doing you will use the skills of citizenship?observation, analysis, debate, and careful selection of value judgments?to reach, express, and defend an opinion. These exercises provide practice for the responsibilities you will encounter in the years ahead.