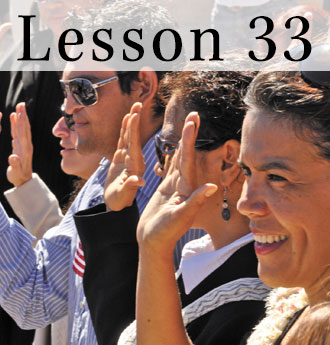 Lesson 33: What Does It Mean to Be a Citizen?

Justice Louis D. Brandeis once remarked that "the only title in our democracy superior to that of president is the title citizen." Brandeis was acknowledging one of the oldest principles of American democracy, part of the nation's legacy of classical republicanism. America's experiment in self-government depends foremost not on presidents, members of Congress, or justices, but on each of us as citizens. This unit begins with a discussion of influences of classical republicanism and natural rights philosophy on Americans' ideas about citizenship. It concludes by offering you the opportunity to discuss some of the most fundamental questions of citizenship. This lesson examines the concept of "citizen," how the concept has changed in American history, how one becomes a citizen, and the moral and legal rights and obligations of citizens.